Gather at Occupy Town Square in Central Park, just inside the main entrance at Columbus Circle

Converge at Columbus Circle, with Strike Debt, for an assembly, followed by a casserole march (in solidarity with the international call to bang pots and pans and make “globalNOISE”)

Activists involved in the Indignato, Occupy, #yosoy132, etc  movements have begun a campaign to create GlobalNoise, a worldwide cacerolazo, or casserole march, on Saturday, October 13th, 2012. The hope is that local Occupations and Collectives will take up the call to march, using the method of a casserole march to highlight whatever issues are the most important to their community.

Historically, banging on a pot has been a universally understood means to gain attention. The casserole march has its origins as a means to call attention to problems facing the community that the power structure is not addressing, using a method that is hard to ignore. In the past, this form of activism has been used to draw attention to education reform, starvation, government corruption, inequality in resources, and more.

It has been revived recently in the international Occupy and Spanish Indignatos movements, and most notably by the Student movement in Canada. Since then, it has spread worldwide. It is from these historical references and recent examples that the idea of a coordinated worldwide cacerolazo emerged. An international showing of frustration and unrest on a global scale that would be hard to ignore. A GlobalNoise. 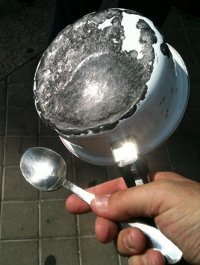 Kitchen equipment may be the first choice, it is most certainly not the only choice. You can use whatever will make noise, even actual instruments, like whistles, horns, vuvuzelas, or even drums. DIY instruments or established noise makers don’t matter, just make noise. You can even encourage drivers to join in with their horns as you pass them on the march. In Spain, they call that “Pitodromo”.

The bigger the group the louder the noise, but even one person banging on a pot makes a lot of noise.

The GlobalNoise working group encourages you to organize Cacerolazo actions in your own city for October 13th 2012. (Due to events already being planned and in progress in various assemblies, some groups and collectives will have GlobalNoise actions over the course of that week. So if the 13th is impossible for your group, try for another day in that week.

Remember, potbanging marches are particularly suited for spontaneous participation, especially if the attitude and tone of the march stays festive and positive. Spectators quickly realize that they don’t need anything more than a noise maker to join in. 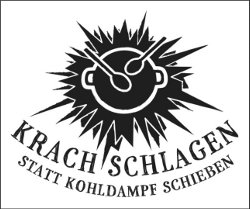 There have been many potbanging-protests worldwide over the last year since the formation of the Ingdinado and Occupy movements. The reason for unrest has ranged from the student debt crisis to the shortage of resources, while the method of expressing the frustration has been the same.

There was a large casserole march against inflation in Argentina earlier this year. Reuters reported that “Several thousand Argentines protested against the government… by banging pots and pans in front of the presidential palace in Buenos Aires.” In Seattle, the “noise making” from the Student Debt Noise Brigade takes place once a week. In addition, as reported by Global Montreal, the Montreal casserole marches inspired solidarity demonstrations worldwide. Even back in October 2010 Oldenburg, Germany  held the ‘Krach schlagen statt Kohldampf schieben‘ demonstration demanding living wages and fair access to resources.

A worldwide globalNOISE is coming

In June of 2012, activists from many different countries, social justice movements, and networks began planning a nonviolent worldwide day of action connected solely by this most noticeable of protest methods, the cacerolazo. The collected activists formed a working group, and the following proposal was created.

Each collective or general assembly interested in participating is encouraged to identify what local or regional issues most adversely affect their communities and then join the world in a casserole march. We feel using the power of our collective mass can create a sound of our world population calling out for change that will be hard to ignore.  The globalNOISE working group has called for Saturday October 13th to be the day of action where we as flood the streets and towns with the distinctive noise of potbanging.

As of late August, members of the Indignado and Occupy movements from many cities, including London, Brussels, Chicago, Madrid, Paris, Hamburg, and Perth, have endorsed this proposal and/or begun planning a globalNOISE casserole action. And the list is growing daily. 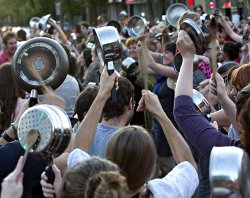 We will make a globalNOISE!